JasonAQuest
September 2013 edited March 2015 in Procrastination Devices
For various reasons, I don't buy original art.  It's something of a financial indulgence, I'm a reader not a collector, and who has space to display it?  But I just made an exception.  I received a hair over $200 for my Anything That Loves story, and by coincidence I saw that Howard Cruse was discounting a lot of his original art.

He's better known today for Stuck Rubber Baby, but he carved out a niche in the less-psychotic wing of the 1970s underground comix with Barefootz, then in the 1980s came out and did a strip for The Advocate.  Wendel was a full-page strip (then two-page when they switched from newspaper to magazine format) about a determinedly up-beat gay-next-door and the people in his life.  I "discovered" it looking thru back issues of the magazine that an older friend had held onto, and it's definitely one of the things that rekindled my childhood dreams of making comix myself.  So the chance to own some of it at a price I could justifiably afford ($250 for a 2-page story) was too good to pass up. Especially when I saw that the next-to-last episode was still available.  The magazine was dropping the strip (and one by Alison Bechdel) in a misguided attempt at respectability, so Howard was tying up some long-running threads, including the trashy sci-fi novel that Wendel had been writing in his spare time.  Which for some reason kinda speaks to me, ya know?

The pages are an imposing 16x22" each (good thing I don't have a lot of art on my walls, eh?) and clean enough that you'd almost think he skipped pencils and went straight to pen and ink (and a little brushwork on the hair).  100% hand-lettered.  A few bits of white-out here and there, and one spot where he cut out a small piece of the board surface to remove a mistake.  The logo was preprinted on adhesive paper, and the "next issue" caption is also done on a white sticker.  Just-legible camera snaps follow: 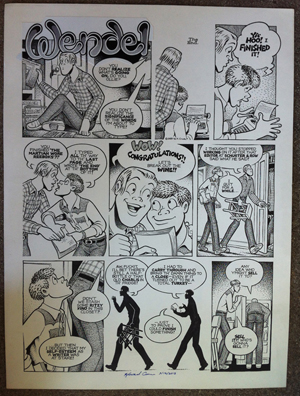 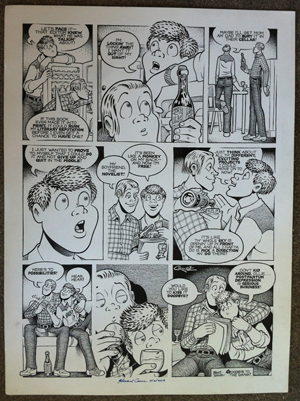